Travellers tell Scottish Government of the last ‘acceptable’ racism faced by their community, describing prejudice as a barrier to opportunity, accommodation and employment.

I began the session by giving a summary of the situation on the ground for young Travellers in Scotland; 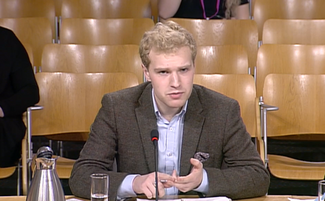 We’re at a critical point. For the Scottish Traveller community we really, really need affirmative strong action from the Scottish Government.”

Among those who spoke was Anthony Johnstone, a young Traveller from Edinburgh. He stated that being a Traveller means you constantly struggle to gain employment. Talking about disclosing a Traveller identity he stated; “As soon as I’ve got that mark against my name: blacklisted my whole life.” He explained that when he travels to find work as a landscaper, he finds doors are always slammed in his face, often with the words “you’re a tinker”.

Charlotte Donaldson, a young Traveller from Angus, stated that she too had seen racism act as a barrier to employment:

“I applied for a job at a nursery and a younger girl went for the same role I applied for. She was more experienced and qualified, but somehow I got the job. When I went into work and was chatting to my co-workers – the ones that were looking over the applications – and decided to ask them how she didn’t get the job as she was more qualified. There reply was, ‘Oh you didn’t know, she’s a dirty pikey’”

Others added that suicide rates among Traveller men is often linked to a ‘perpetual cycle of unemployment and forced homelessness due to evictions’.

Site provision and discrimination within the planning process was also brought up.

John McDonald, a young Traveller from Aberdeenshire, stated that he had seen first hand the seemingly prejudiced way a site development can be dealt with by a local authority.

Talking about the lack of support the North Esk Park Traveller site gained from the local authority at foundation stage, he now believes that complaints causing denial in planning permission are based on racism:

‘It just feels like they are making excuses…there’s over 100 people on North Esk that are going to be put homeless, maybe next month. Most of them are women and children, there’s nowhere for them to go except maybe a car-park or a lay-by…there’s never any bother on North Esk, there’s even a school on there now. Racism really…’ 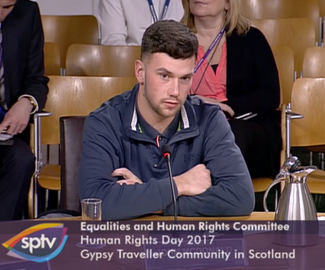 “Living conditions is a joke…when I go to the warden and ask him – there’s an overflow of rats – it’s not good I have baby sisters, family that stays around me that’s young…the warden will turn around and say well get a cat.”

Anthony continued to state that it may be a joke for others, but for Travellers living there it’s a fact of life.

I called for local authorities to do more to work with Travellers to build sites both private and council run.

Talking after the meeting Shannon Macdonald, a young Traveller from Oban, stated:

“I thought people wouldn’t take us seriously to be quite honest so I wasn’t expecting much. But I can honestly say I think we made a big difference.

Most of the people there seemed to know very little about the Gypsy/Traveller community, in fact they seemed quite shocked at some of the things stated…which I couldn’t believe because you’d think they would know more about us, they make decisions about how to deal with us yet they know almost nothing.

I’m so proud of everyone who attended for educating these people and helping them understand, I hope we’ve made a difference in the way they made decisions.”

Talking to media after the event, Charlotte Donaldson stated:

“at the end of the day we are just people, trying to live our life as happy as we can, and get through it just like everyone else.”

Experience shared by the young Travellers will be used by Government to feed into future human rights strategies and Government Equalities outcomes. 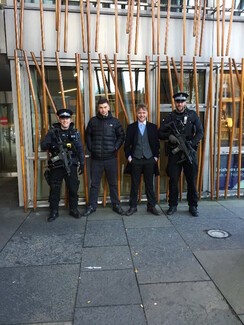 You can view a recording of the full Government meeting here: